Are you experiencing temperature issues while using mini fridges? There are no defects after you’ve checked the settings but it still doesn’t reach the set temperature. The answer is unfortunately yes almost all the time.

It is a common issue which is easy to fix as it can be made colder following a few simple steps.

How to make a mini-fridge colder?

To make a mini-fridge colder, make sure it is in a cool place and not surrounded by any items or walls. Items pressurize the compressor to reflect the heat on the mini-fridge, causing it to warm up. Additionally, place no obstacles in front of vents, especially no warm food.

Keeping items such as bags, appliances, walls, boxes, etc. can affect the mini-fridge as its temperature inside changes due to their presence. The compressor needs to dissipate the heat it generates and it cannot do it if it is surrounded by walls and items.

As a result, the heat is reflected back on the surface of the mini-fridge, with its heat entering inside the cold area. Blocking vents have the same impact on the mini-fridge as the obstacles barely allow it to breathe properly.

Thus, there are few simple ways to make a mini-fridge colder without having to alter its settings. All it requires is the environment to be cool. Hence, it doesn’t require specialists as it can be easily fixed.

The ways to make a mini-fridge colder includes:

Place it in a cool place inside the house. It is not preferable to keep it outside as it affects the thermostat.

The thermostat adjusts its temperature according to the outside temperature.

Remove anything besides the mini-fridge:

Keep a 2-inch gap between the mini-fridge and other things such as appliances and walls. The gap rule applies to all sides.

The vents might be blocked with obstacles such as dirt or food; they block the airflow which reduces cooling.

Hence, find out the vents and clear the obstacles. 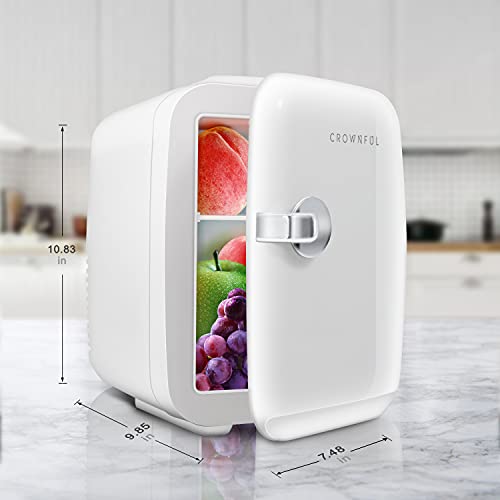 The thermostat needs to be set with lower temperatures to make the mini-fridge colder.

To change it, use the thermostat dial or the touch panel.

For example, in the Magic Chef mini fridge tick 5 on it as it’s the coldest temperature on it.

Cool down the food before storing:

The temperature sensors can detect hot food inside the mini-fridge.

It automatically increases the temperature by signaling the compressor.

Why is my mini fridge not cooling?

The main reason for mini-fridges not cooling might not be its settings, but the position where it’s kept, its parts, and maintenance.

On the other hand, it could be the parts of mini-fridges that fail to operate. The compressor might fail, hence cycling more often. But if the compressor’s working and it’s still not cooling, then the evaporator fan motor isn’t working. As a result, it’ll stop cold air circulation in it.

Other parts such as the condenser fan motor and thermostat may also not work; start relays, the control board, and evaporator coils could also be the reason for not cooling. In that case, they need to be replaced.

How do I know if my mini-fridge compressor is bad?

It is easy to detect bad compressors and it can be done in more than one way. The ways to know if the mini-fridge compressor is bad are:

Notice the noise of the compressor:

Sit close to your mini-fridge and pay attention to the noises it creates.

If it has a low humming or buzzing noise, it is working. However, if it doesn’t make any noise or makes loud and unusual noises, its compressor needs to be replaced.

Bad compressors may also make a knocking noise when it’s turned off. 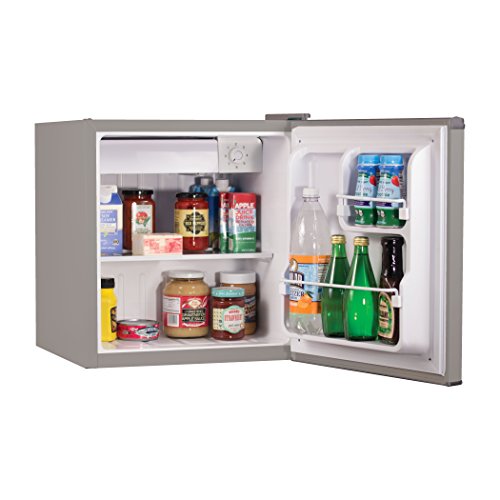 To check if it’s working, remove the side panel after unplugging all the wires. The black box inside it is the starter relay switch. Shake it and notice its noise.

If it makes a rattling noise, it’s not working and neither is the compressor.

If the compressor can be heard making frequent ticking noises, it’s switching off and on frequently as it is most likely broken.

How do you fix a mini-fridge that is not cooling?

To fix a mini-fridge that is not cooling, checking its components is the most important part as only the broken components should be changed.

Once the faulty component is detected, it needs to be replaced.

The steps to fix a mini-fridge are:

Unplug it from the power socket:

Create a large distance between the walls and the mini-fridge.

Remove the cover of the mini-fridge:

Pry out the screws and remove the cover to find out the targeted component.

Carefully remove the screws that hold it in place. 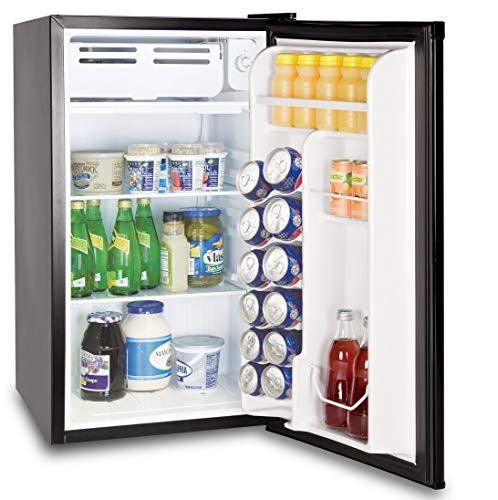 Attach the mounting brackets, wires, and switches to it with wire connectors and check if it runs properly. Make sure to follow all the manufacturer’s instructions.

If replacing and installing new components does not work, most likely a new mini fridge will be required.

How long does a mini fridge take to cool?

Generally, a mini-fridge takes 3 to 4 hours to cool after it has been plugged into a power socket. It also depends on the fridge and its efficiency levels.

To reach the set temperature on the thermostat, it will usually take 24 hours, given that it is set up properly according to the manufacturer’s instructions.

What temp should the mini-fridge be?

However, for keeping it within the coldest temperatures, it should be kept between 32 °F (0 °C) and 42 °F (5 °C). Setting it above these temperatures can spoil the food stored inside and cause other problems.

How cold can a mini fridge get?

A mini-fridge can get quite cold when it is set to a relatively low temperature.

On the other hand, a mini-fridge with a thin freezer section can get 5 °F temperature as its lowest.

However, frequent fridge door opening makes it warmer than usual.

Is the higher number on the mini-fridge colder?

Hence, usually the higher the number goes the colder the fridge will get and this is why the highest number is the coldest. Sometimes, some dials have numbers up to 5 and it means that keeping the mini-fridge at 5 will make it colder than it was when it was 1. 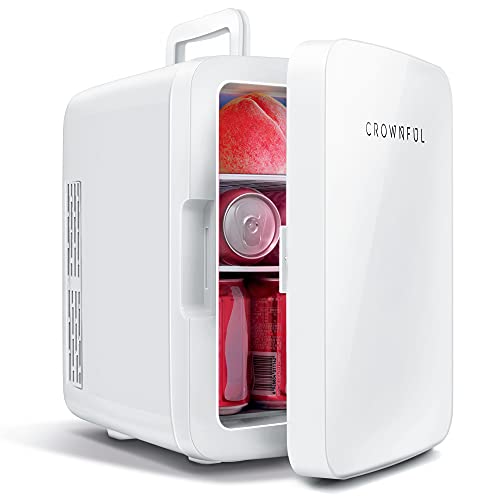 Generally, a mini-fridge has a touchpad or a dial with numbers 1 to 7. The coldest number on the dial or the touchpad is 7. Hence, 7 is colder than 1 on a mini-fridge.

Is it worth fixing a mini-fridge?

Typically, hiring an electrician or appliance technician costs around $45 to $130 per hour, which is quite costly. Other costs come with those, such as service change which may add up to $100 to $200 excluding the costs of new components.

On the other hand, purchasing a new component such as a compressor relay will cost you around $30. Sometimes, unplugging and waiting for 25 minutes to plug it in again fixes the issues and regulates their system.

The difference in the costs is huge but the operations done to the mini-fridge are almost the same. Hence, it is not worth fixing it by a specialist. The best option would be fixing it on your own or purchasing a new mini-fridge.

It is quite easy to maintain a mini-fridge to keep it cold at all times when the proper take is taken. When using, certain restrictions, such as cooling down warm food before storing, must be strictly followed.

On the other hand, the components inside the mini-fridge should be checked to ensure that it’s cooling. However, the manufacturer’s instructions should be followed strictly when opening, operating, attaching, or detaching certain parts of the mini-fridge.

Can Mini Fridges Be Used Outside?

Can You Plug a Mini Fridge Into an Extension Cord?

Can You Put Things on Top of a Mini Fridge?

Do Mini Fridges Have Freezers?