What makes Dutch ovens such a favorite among people who cook often? It is a fact that these can last a lifetime and have the ability to be great heat conductors.

If you want your Dutch oven to last longer, especially when it is made of cast iron, you would need to season it. Yet, you may want to know if all Dutch ovens need to be seasoned.

Does a Dutch oven need to be seasoned?

A Dutch oven needs to be seasoned when it is first bought. Seasoning cookware is to stick oil to the cooking surface in order to prevent it from rusting or corroding. Other than that, seasoning a Dutch oven makes sure that your food does not stick to the pan as well.

If you want to go ahead without seasoning a Dutch oven, you might even be left with a strange smell in your food. You may want to remember that not all Dutch ovens require as much seasoning as a cast iron type.

Some cast-iron Dutch ovens will be preseason from the manufacture. If you have bought a ceramic or enamel-coated Dutch oven, you can do without seasoning them, except for the cast iron parts.

Still, it is highly advisable to season any Dutch oven that you might have. With each use and cooking, the seasoning is naturally improved.

Do all Dutch ovens need to be seasoned?

Although most Dutch ovens need to season, some exceptions require no seasoning.

While some ovens come pre-seasoned, others need to be seasoned to incorporate the oil on the surface to make it nonstick. 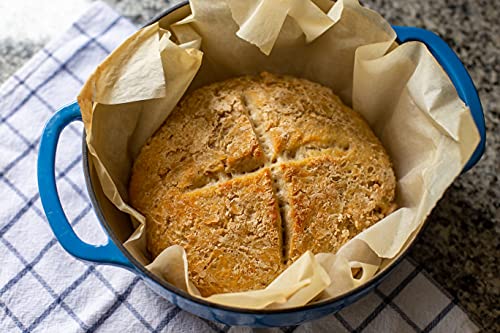 Do you have to season a ceramic Dutch oven?

One of the exceptions when it comes to seasoning Dutch ovens is one that is made of ceramic. Fortunately, ceramic Dutch ovens do not require seasoning.

If you have just bought, one you’d need to boil water on it. Follow it up by washing the ceramic Dutch oven with soapy water and a brush.

If your ceramic Dutch oven has exposed iron parts, you need to season those parts using oil or butter. Put it inside the oven in an upside-down position, and bake it for an hour at 191 degrees Celsius.

However, if your Dutch oven is 100% ceramic, you can skip this step. We still recommend that you put a little more oil when you first cook in your new ceramic Dutch oven.

Do you have to season a cast-iron Dutch oven?

When your Dutch oven is made of cast iron, it is a necessity to season it before the first use. While modern cast-iron Dutch ovens are preseason, to this day, the more affordable ones come without prior season.

A cast-iron Dutch oven without proper seasoning will be prone to rust and corrosion. The Dutch oven will not last long due to the same reason. Additionally, if you cook in a cast iron utensil without seasoning, the food would be left with a distaste and smell.

Other than that, nothing sticks food like a non-seasoned cast iron surface. If you don’t want your omelet to stick to your oven like glue, you’d want to have your cast iron Dutch oven seasoned.

Do you have to season an enamel Dutch oven?

While that is a big advantage in heat retention, a well-seasoned cast-iron would still have better rust protection and nonstick surface than a non-seasoned enamel dutch oven.

Underneath the enamel coating, there is cast iron. The exterior above is what crates the non-porous surface. 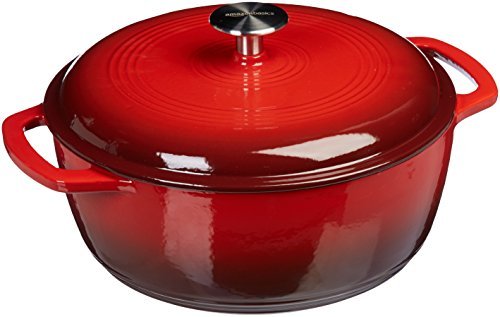 Why do you season a Dutch oven?

There are a few good reasons why you have to season a Dutch oven before its first use. Seasoning a Dutch oven makes sure that food does not stick to your oven’s base.

As it creates a nonstick surface, your oven that brings contaminants from the factory does not transfer those to the food.

How long does it take to season a Dutch oven?

Although seasoning a Dutch oven is simple work, it does take a considerable amount of time. With no prior work, it would take at least an hour and a maximum of two hours to season a Dutch oven.

If your Dutch oven is such that it comes with a layer of wax on top of it, you would need some additional time to remove it. This piece of pre-seasoning work could take about an hour.

Do Staub Dutch oven, Lodge Dutch ovens, and Le Creuset dutch oven need to be seasoned? Do they come pre-seasoned?

However, to make sure these Dutch ovens are coated with a final layer of seasoning, it is always wise to season them before the first use.

Staub Dutch ovens, as well as, Le Creuset Dutch ovens are enamel cast iron mixtures. This means, although they do not come pre-seasoned, the enamel coating requires minimum oil and no seasoning.

On the other hand, Lodge Dutch ovens are pre-seasoned and only improves with each time you cook on them. 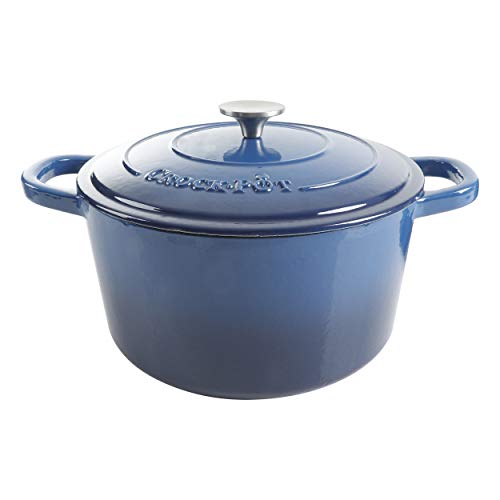 How do you season a dutch oven?

Whether your Dutch oven is pure cast iron, enamel-coated, or comes with a preseason label, there is a correct method of seasoning a Dutch oven, depending on what kind you are using.

The basic steps of seasoning for all Dutch ovens remain the same.

Although there are many cast-iron Dutch ovens that come with pre-seasoned surfaces, seasoning this surface is mandatory.

For that you need to first preheat your oven to 400 degrees Fahrenheit, and before doing so place aluminum foil along with the baking paper on the rack at the bottom.

Next, use a brush, soap, and eater to scrub off and clean the cast iron Dutch oven thoroughly. Make sure you dry it completely before the next step.

Use a paper towel to apply oil all over the cast-iron Dutch oven. Do not leave out the lead or tiny parts. Next placing the Dutch oven upside down, bake it for about an hour.

After taking it out of the oven, let it cool before use starts using it for cooking up meals. 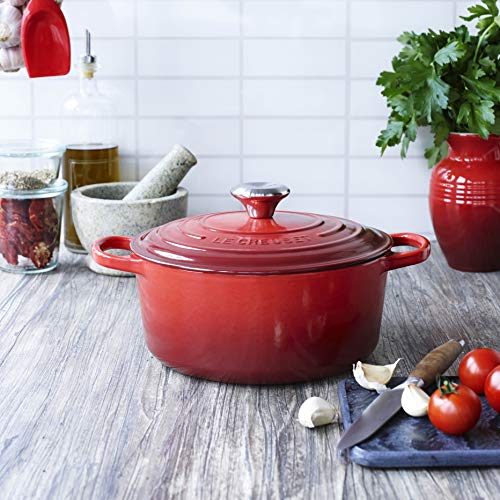 Since enamel-coated Dutch ovens do not require so much seasoning, they always have exposed cast iron parts that require seasoning.

For that, you would need to coat those parts in vegetable oil and bake them for an hour at 350 degrees Fahrenheit in the same upside-down manner as a cast-iron Dutch oven.

For enamel-coated Dutch ovens, you would be adding a little bit of oil every time you cook to inevitably improve the seasoning.

Though, seasoning any kind of Dutch iron is wise for the longevity of the kitchen utensil and the safety of the food you eat. For these, wash the ceramic Dutch oven with soapy water followed by drying.

Next, in the same way, bake the oven 191 degrees Celsius in the top rack with the bottom lined with baking paper. Although not necessary, you can be sure that any factory remains will be eliminated with this process.

Used Dutch ovens get seasoned over time you use oil for cooking. In that case, you would follow the same process for seasoning the cookware except you the washing step.

Without washing the Dutch oven, bake it for an hour or less and let it cook before the next use. If you notice rust or scraped surface, seasoning it again would also help.

Remember that your Dutch oven should always be dark brown or black and a scraped surface would make it look different. 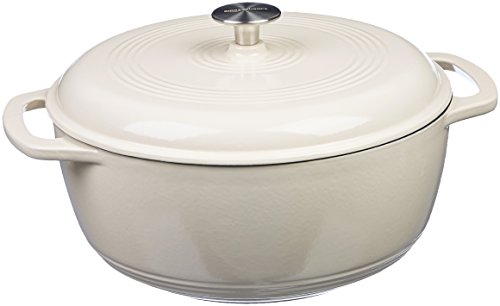 Can you season a Dutch oven with olive oil or coconut oil?

Not all oils can be used to season Dutch ovens. Vegetable oil is the most popular greasing medium, but many use other oils as well.

For seasoning Dutch ovens, it is not recommended that you use olive oil. Olive oil is healthy and flavorful for cooking.

However, it is not enough when it comes to creating the nonstick surface after seasoning. You may cook with olive oil in the preseason or enamel-coated Dutch ovens to season it over time.

Much like other oils like canola or vegetable, you would only need a teaspoon or two of coconut oil to season your Dutch oven. You only have to wash your cookware before the seasoning.

Do you need to season a pre-seasoned Dutch oven?

There is no harm in seasoning a pre-seasoned Dutch oven. If the Dutch oven is made of cast iron and it says it is preseason, the advice that we put out is for you to season it fully, as you would to a non-seasoned one.

Pre-seasoning not only makes sure that your Dutch oven is certainly rust and corrosion resistant, but it also gets rid of any contaminants that the oven might be carrying from the factory.

How do you treat a new Dutch oven?

If you have a brand-new Dutch oven you want to make sure you season it right, the first step is to wash it with soap and water. Use a brush to scrub off all parts of the oven.

Next, you would want to use an oil, preferably vegetable oil to grease every part of the Dutch oven. Make sure to use adequate oil on the surface.

Next, bake the Dutch oven in an upside-down position for an hour. 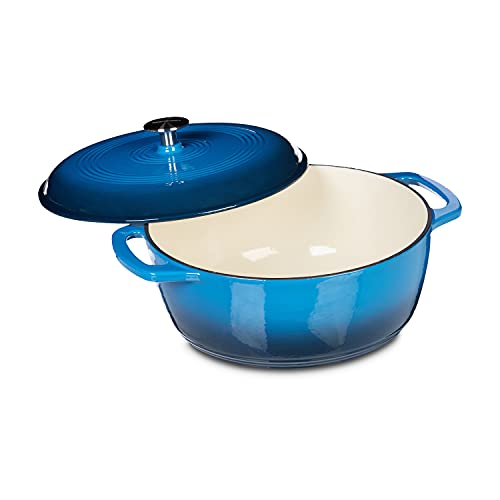 Can you line the Dutch oven with foil?

You can certainly line your Dutch oven with foil. You can either use aluminum foil, baking paper, or a combination of both.

Lining your Dutch oven with foil will also make sure the surface is not burned or charred. If you use aluminum foil, is it best to dust or grease it before using it?

Between the two, aluminum foil works better as a liner than parchment paper.

What Can You Cook in a Dutch Oven?

Will Bread Dough Stick to the Dutch Oven

How Hot Can a Dutch Oven Get?