It is a common concern for both home cooks and professional chefs to worry whether their cookware will catch rust. They find rust on their favorite ovens and dishes without even realizing what the cause might be and how it could be avoided.

In this article, we will take a look at whether dutch oven rust and how we can clean it. Read ahead to learn all about it.

Yes, dutch oven rust. Most dutch ovens are made of cast iron. So they can easily catch rust when exposed to excessive moisture. In order to avoid rust, you need to keep your dutch oven clean, dry, and well seasoned. In addition, you will have to store it in a place with good air circulation.

Several factors can cause a dutch oven to rust. These ovens are made of cast iron, which is prone to rust. Despite all the efforts of innovators and engineers, the dutch oven still rusts.

Most manufacturers pre-season the oven in order to minimize the risk of rusting.

Unseasoned dutch ovens pose a much higher risk of succumbing to surface damage due to rust. But these ovens catch rust anyway. So, you will still have to season the oven every once in a while to keep it rust-free.

Moreover, the oven can rust when it is exposed to moisture. Moisture can cause higher levels of damage to the surface if it is not seasoned properly.

Excessive humidity can cause rust as well. If you live in a region of high humidity, make sure to season the oven properly and store it in a cool and dry place.

Do I have to worry about the dutch oven rusting?

Yes, you will have to worry about the dutch oven rusting. These ovens are primarily made of cast iron. And as we know, cast iron and moisture do not make a good combination; they cause rust quite fast.

So, dutch ovens are prone to rust when they are exposed to moisture. Unseasoned dutch ovens are always at a higher risk of rusting. However, you can restore these ovens by cleaning, seasoning, and more. 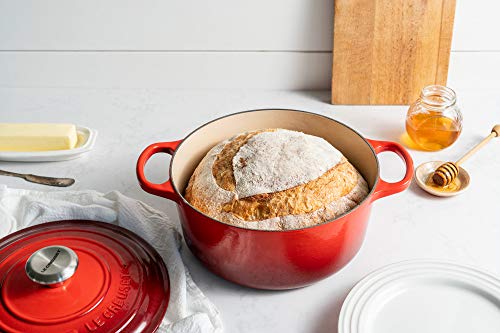 Why is my dutch oven rusting?

Dutch ovens rust mainly because of the material that is used to construct them. It is prone to rust and succumbs to damage due to rust quite easily.

If you’re wondering why your dutch oven is rusting, here are the main reasons behind it:

When the dutch oven is exposed to moisture or humidity, it goes through some chemical reactions known as oxidation. These reactions take place when iron meets moisture and form iron oxide.

The layer of iron oxide that is considered the product of this reaction is called rust in laymen’s terms. It is reddish and forms a flaky appearance on the surface of the iron.

When the cast iron dutch oven is not seasoned properly, it is more likely to rust. The seasoned layer on top of the cast iron protects the oven from humidity. But if you leave the dutch oven unseasoned for long, it will succumb to damages due to rusting.

How to clean a dutch oven with rust?

To clean a dutch oven with rust, you will need a scrubbing brush, some steel wool, and lukewarm water. Scrub the surface of the oven hard. Keep on repeating the process until it is free of rust.

Once you’re done scrubbing, rinse the dutch oven with water. After that, make sure that the oven is dried well. Now sprinkle some oil on the surface of the oven in order to season it.

Place the item inside on top of a grill and season it at 400 degrees Fahrenheit. Keep on grilling until the seasoning oil reaches its smoking point. This is how you should clean a dutch oven with rust. 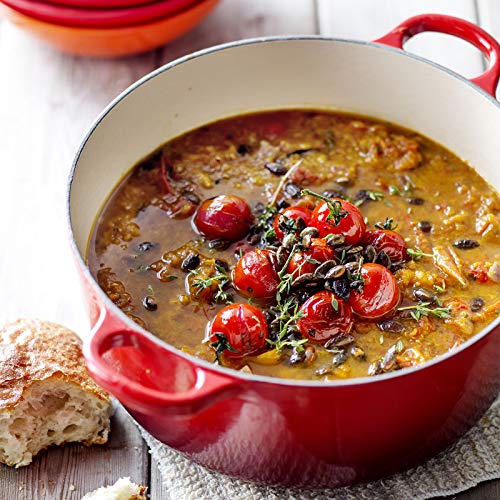 How to get rust out of Dutch oven?

While dutch ovens catch rust rather easily, you can get rust out of dutch ovens following these simple steps:

Remove the rust with vinegar and water:

Submerge your dutch oven in a sink that’s filled with equal parts lukewarm water and vinegar. Merge the lid of the dutch oven into the water as well.

Now let the dutch oven soak in the mixture for a couple of hours. Do not leave it in the vinegar mixture for too long, or it will cause damage to the oven’s surface.

At this point, the rust will be easy to remove. The vinegar and water will have to make rust removal very easy. All you have to do now is scrub it hard with a plastic or nylon brush.

This step will help you add the final touch to get rust out of the dutch oven.

If you see that there are still residuals from the rust, repeat the process until it is completely clean.

Once you have cleaned the dutch oven thoroughly and got the rust out of it, make sure to let it dry. You can also dry it using a napkin or kitchen towel.

Make sure to not leave any moisture on the surface of the pot or lid. Otherwise, it will cause the dutch oven to rust again within a short while. 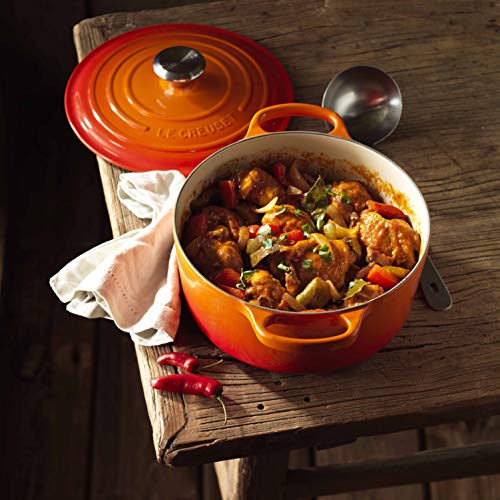 How do you keep a Dutch oven from rusting?

These are several measures you can take to prevent rust from forming on the surface of your dutch oven. These measures should be taken after purchase and each time after cleaning.

Here are some of the most effective ways you can keep a dutch oven from rusting:

The most effective way to prevent your dutch oven from rusting is by seasoning it regularly. It is believed that dutch ovens are naturally prone to rust. But a properly seasoned dutch oven has a much less chance of catching rust.

After cleaning and drying the dutch oven, heat it up and sprinkle some cooking oil on top of the pot’s surface. Spread it across the surface evenly and let it heat. This will help you keep the dutch oven from rusting frequently.

Dry out any extra moisture:

Another common practice is to dry out any extra moisture from the surface of the pot or lid. Moisture is the primary enemy of cast iron dutch ovens and they cause the cookware to rust.

So after you are done using the dutch oven, clean it thoroughly. Then put it on the stovetop, upside down, and let the moisture burn out. This will help you prevent rust on the cast iron dutch ovens. 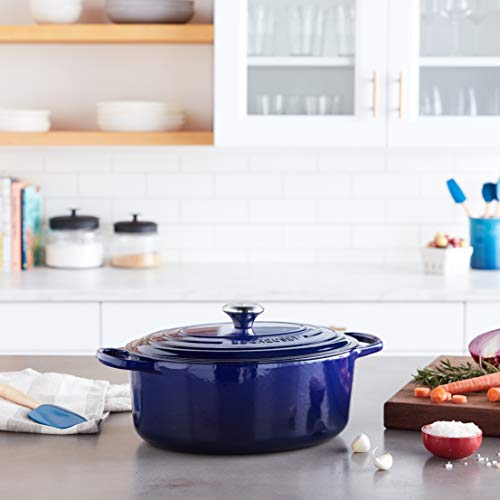 Can a badly rusted cast iron dutch oven be restored?

Yes, a badly rusted cast iron dutch oven can be restored. The process is rather straightforward and will make the oven look fresh as new.

Cast iron dutch ovens are naturally prone to rust. But restoring them is also quite easy. Even if it turns bright orange due to rusting, you can revive it to look brand new.

How to season a rusted dutch oven?

You can season a rusted dutch oven by following some simple steps. Firstly, scrub the surface of the dutch oven that has been rusted. Use some warm water and a scrubber to implement this step.

Next, rinse the surface and get rid of all the residuals. Clean the dutch oven thoroughly before you season it.

Once you have a clean, rust-free cast iron dutch oven, apply a very thin layer of cooking oil. Spread it evenly across the surface.

And place it in an oven and make sure to bake it well. Then turn it upside down to get an even seasoning.

Can you use a rusty Dutch oven?

You can use a rusty Dutch oven unless it is very rusty. The surface will work just fine with lower levels of rust.

However, if the rust is too dominant on the surface of the Dutch oven, you will need to clean it and get rid of the rust. You can also let it sit on top of a stove to let the heat eat away the rust. 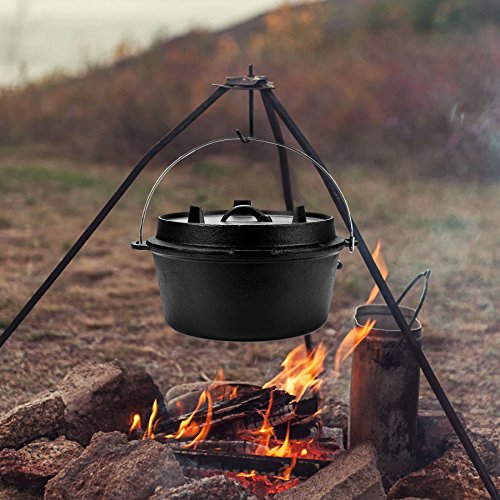 Enameled cast iron has a protective layer on top of its surface which keeps it from rusting. So no, enameled cast iron cannot rust. You can wash it with soap as much as you like and it won’t need seasoning as frequently as cast iron cookware.

All in all, enameled cast iron is a safer alternative with much less chance of building rust on its surface.

Dutch ovens that are made of cast iron are naturally prone to rust. Unless they are enameled, these dutch ovens rust when they are exposed to moisture or higher levels of humidity. However, cleaning, drying, seasoning, and storing the dutch oven in a cool place minimizes the risk of rusting.

Is a Casserole the Same as a Dutch Oven?

Why Does My Dutch Oven Smell? and How to Get the Smell?

Do You Need to Preheat a Dutch Oven?

Do Dutch Ovens Work on Induction?