Dutch ovens have been a beloved item in the kitchen for centuries now. And they have evolved greatly with changing times and trends but have they been modified to be completely non-stick now?

Are Dutch ovens non-stick? Why does my dutch oven stick?

Dutch ovens are manufactured to be non-stick. But many people complain that food sometimes sticks to the bottom of the dutch oven. This happens when food is being cooked using high heat which can often cause the food to get burnt and burnt food will stick to the bottom of the pot or pan being used.

Are all dutch ovens non-stick?

Dutch ovens are produced by many different companies. And even though the main concept is the same, it is impossible for them to be exact duplicates of one another.

Companies manufacture them for the target customers they are trying to attract and the product heavily depends on the customers’ preferences. Therefore, whether they will be non-stick or not varies depending on the company producing them.

Le Creuset has very recently started to make non-stick dutch ovens using better quality materials which they claim are an upgrade from the old versions and ensure they are non-stick. 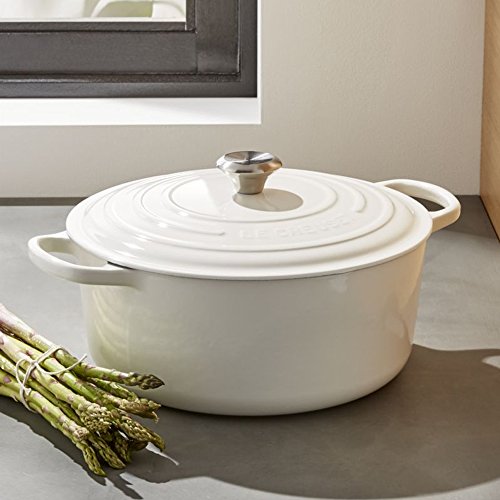 Many people make the mistake of thinking enamel dutch ovens are non-stick due to their glossy finish but that is untrue as food sticks to it. A layer of hot fat is required on its surface to prevent food from sticking.

The dutch ovens manufactured by the lodge are usually non-stick and heavy-duty. They are also slightly more affordable than other available options. 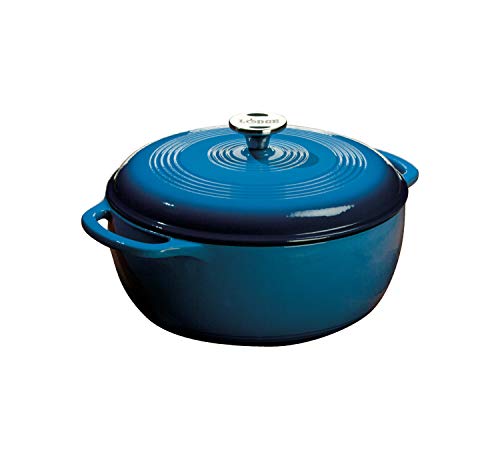 Martha Stewart’s dutch ovens are very popular for the size and design they come in. They are also known to be non-stick and sturdy which is always an added bonus when it comes to dutch ovens. 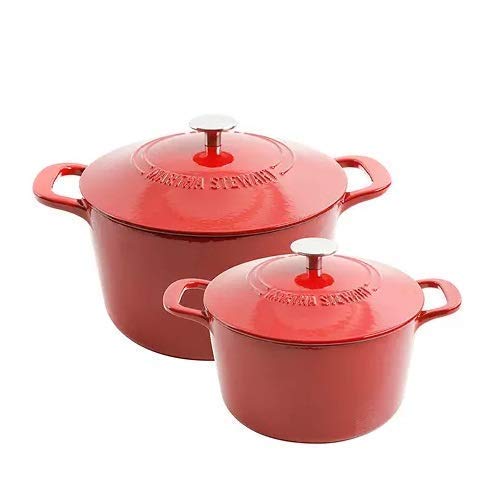 Pioneer woman’s dutch ovens come with enameled porcelain for the cooking surface, this makes them 100% non-stick. They claim their dutch ovens are as non-stick as any Teflon pan. 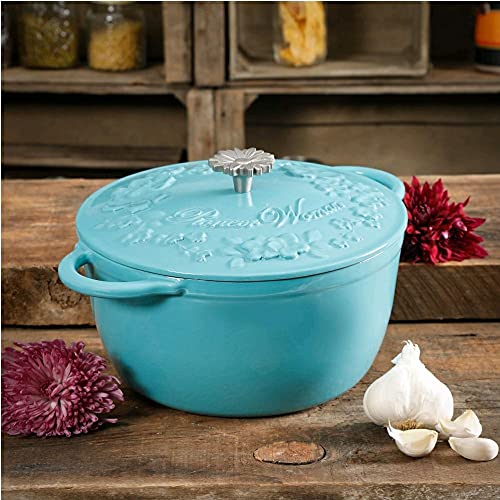 Tramontina offers dutch ovens in various different sizes. They have enameled cast iron dutch ovens which makes them non-stick without even being seasoned. 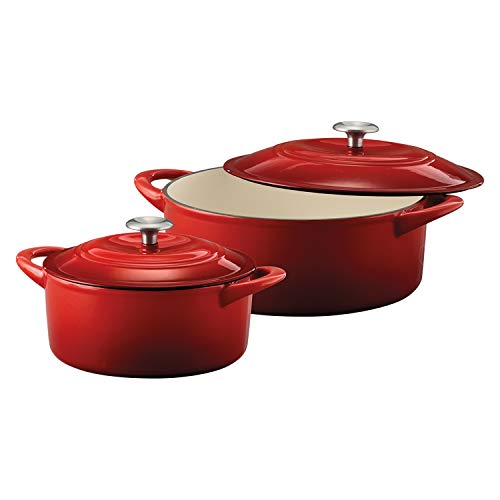 Calphalon used hard-anodized aluminum to produce their dutch ovens and other cookware to make them non-stick.

They also use multiple layers of non-stick coatings which ensure their cookware is 100% non-stick and at the same time increases their durability. 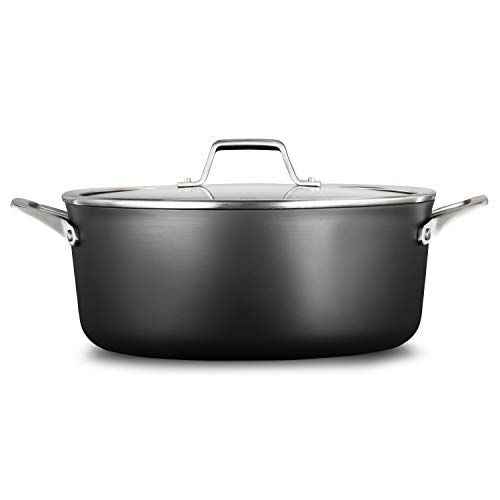 Chrissy Teigen has a line of 12-piece cookware, including a dutch oven and other pots and pans. All of this cookware is non-stick to help cook meat, fish, and vegetables with ease.

Similar to many other cookware brands, Kitchenaid also makes their dutch ovens using hard-anodized aluminum with a ceramic coating which makes it heat-resistant and turns the cooking surface non-stick.

This is to prevent food from sticking to the cooking surface of the dutch ovens and simultaneously make the cleaning process quicker and easier.

Red manufactures heavy-duty cast iron dutch ovens with an enamel coating to make them sturdy and non-stick. They claim that less oil is needed when the dutch oven is non-stick and it can also make the cleaning process easier.

Wolfgang Puck also makes dutch ovens that evenly distribute heat and is very durable. But it is because of the enamel coating the dutch ovens are non-stick. Ergo, they don’t need to be seasoned like regular cast iron pans.

Staub dutch ovens usually come with a black, matte enamel-coated interior which prevents it from becoming sticky or food sticking to the bottom of the cooking surface. This means they don’t need to be seasoned to make them non-stick. 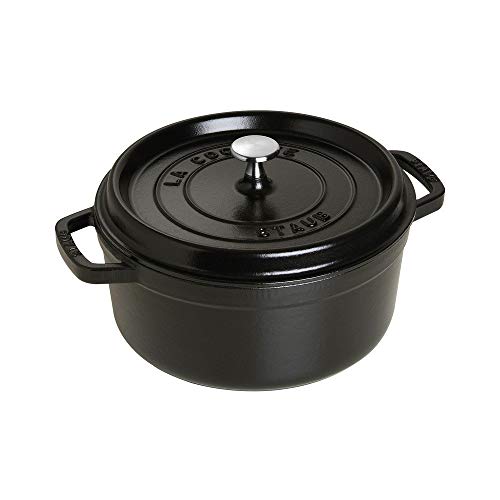 All clad dutch ovens are made using cast aluminum which makes them so light-weight but the best part is they are non-stick which makes them ideal for browning, searing, or slow-cooking as there is no risk of food getting burnt. 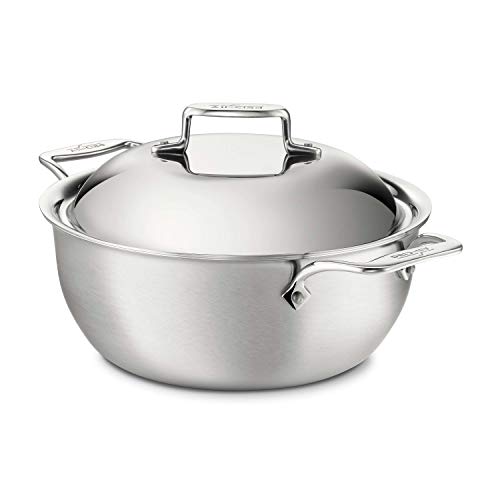 Even with the heat being on for too long.

How do I make my Dutch oven non-stick?

If you notice food sticking to the bottom of your dutch oven, it means the cooking surface isn’t non-stick. But don’t throw it away because it is possible to make it non-stick just by following a few simple yet effective steps.

Massage the oil or fat onto the surface:

While washing the dutch oven with water or soap, take a good quantity of any oil or fat you like but refrain from using flavored shortening or butter.

And begin to gently massage the oil or fat onto the surface of the dutch oven in circular motions.

Repeat this step every time you clean your dutch oven and over time you will notice the seasoning will build up to be a non-stick layer over the cooking surface.

This will prevent food from sticking and also make cleaning the dutch oven easier.

Why does my dutch oven stick?

Food can stick to the bottom of a dutch oven and get burnt inside it for a couple of reasons. And by avoiding these mistakes you can prevent food from being wasted and get perfectly cooked meals every single time.

Just because your dutch oven is non-stick doesn’t mean it can control high heat or its effects. This is why when you cook something using your dutch oven with high heat, it will cause the food to burn due to excessive heat retention.

And burnt food will stick to the dutch oven. And the worst part is once this occurs, food will continue to stick every time you use it.

Many times food will stick to the bottom of a dutch oven because people don’t use sufficient oil or fat before adding the food as they tend to forget that underneath the layer of enamel is a cast iron which can heat up very quickly.

Therefore, coating the cooking surface of the dutch oven is a must if you want to prevent food from sticking especially when you saute onions or garlic.

An easy way to make any dutch oven sticky is by using metal utensils on it. It will scrape at the layer of enamel and before long, you will notice food sticking to the cooking surface of your dutch oven.

You should avoid using metal utensils of any sort on your dutch oven and instead use silicone or wooden utensils while cooking on it.

How to prevent your dutch oven from sticking?

After you have successfully identified the things causing your dutch oven to stick, you can now prevent it by avoiding those practices and who knows maybe you can pass down your dutch oven to generations to come by taking good care of it!

Keep the temperature in check:

It is always a good thing to keep the temperature in check while cooking with a dutch oven as high heat causes sticking. So, if you cook food in a dutch oven using medium or low heat it will definitely prevent it from sticking.

If you use enough oil when cooking in a dutch oven then it will prevent food from sticking to the bottom.

Therefore, you can begin by making sure there is enough oil to coat the entirety of the cooking surface of your dutch oven before you add your food.

Fully dry before you store it:

After you have cleaned your dutch oven, make sure it is fully dry before you store it. This will help prevent the formation of rust. Rust is harmful because once the dutch oven gets rusted, it will begin to get sticky.

Cast iron dutch ovens are not non-stick. You have to season the cooking surface to help build up a non-stick layer over it. This will make cooking much more enjoyable as this layer will prevent it from sticking.

There are also cast iron dutch ovens which come with an enameled surface to make cooking and cleaning easier as they don’t stick.

What can you not cook in enameled cast iron?

You can cook almost every sort of food in an enameled cast iron.

While there are few foods such as delicate fish and acidic food which should not be cooked in a cast-iron as it can damage the seasoning and also transfers iron and other metal particles into the food but you will not be facing the same problem when cooking in an enameled cast iron.

How do dutch ovens work?

The special feature of a dutch oven is that it can effectively retain and distribute the heat evenly. Since it can maintain both high and low temperatures so well for prolonged periods of time, this makes it ideal for braising and searing meat which requires high heat for a long time.

Why does my dutch oven smoke?

A dutch oven that is seasoned can smoke when the level of heat is too high, whether there is no oil on the surface or too much oil. But this is not a cause for alarm as it will stop smoking once it cools down and usually doesn’t cause any harm to the dutch oven.

If you want to prevent this, try cooking in a lower heat setting.

Most dutch ovens nowadays are non-stick but some mistakes can damage the non-stick layer and once that happens, food will continue to stick. So, make sure to keep the heat at an optimal level, use sufficient oil while cooking, and also take proper care of your dutch oven to help it last longer.